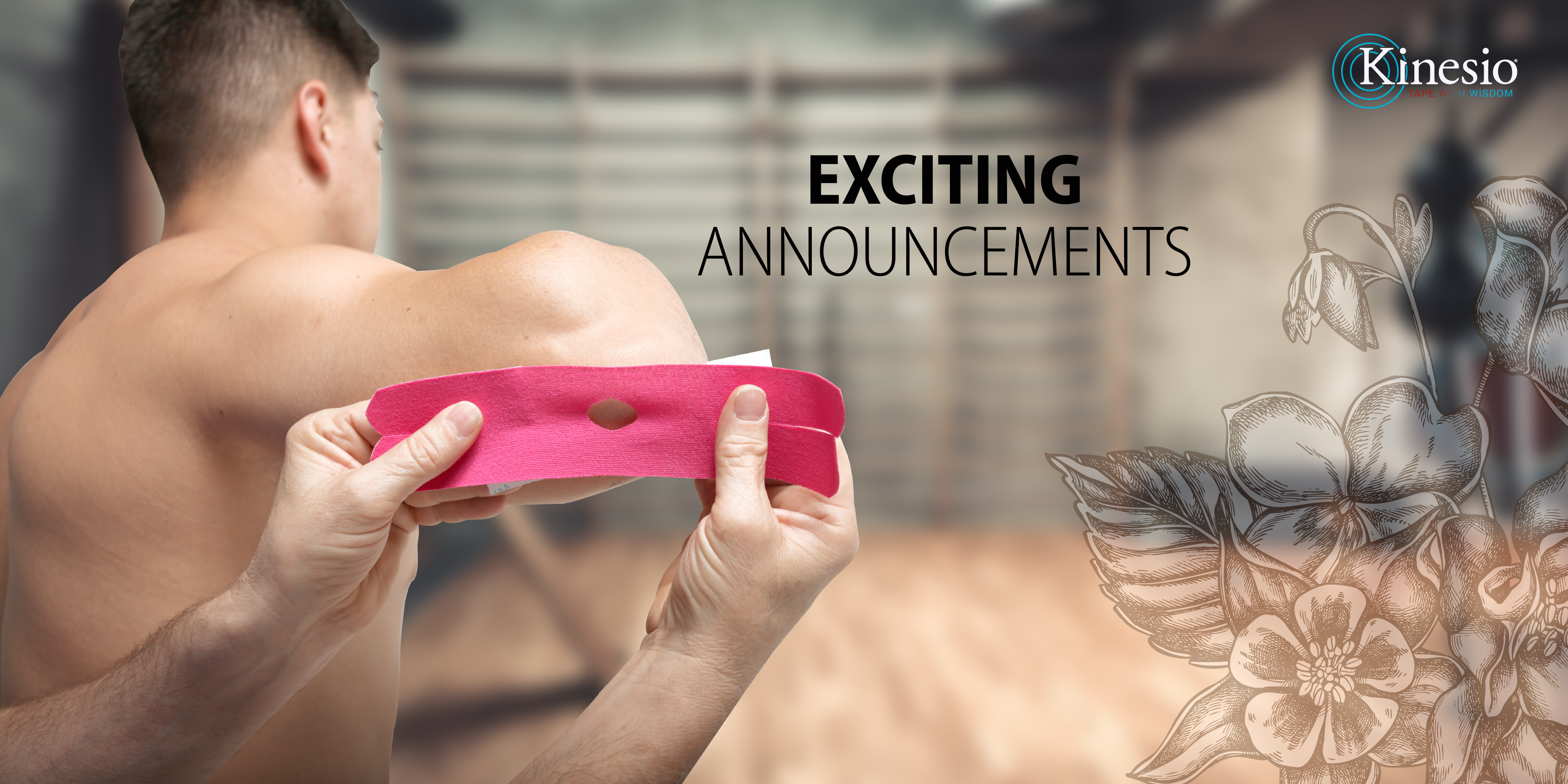 Notice anything new? Perhaps it is the tagline.

TAPE WITH WISDOMTM describes the essence of Kinesio’s mission to enhance the experience of living, whether active or sedentary, by using the right tape with the right methodology to obtain healing benefit. The tagline is new, but its roots go back to the beginning. This outlook has been consistent since Dr. Kenzo Kase® first created the tape and taping concept in the early 1970s.

Tape With Wisdom refers to the skill level of our medical professionals, but that is only part of the point. As Dr. Kase notes, “There is wisdom in Kinesio® Tape itself.” The Kinesio Tape product line, including four different specifically purposed tapes and a range of tape configurations, offers tapes with wisdom inherent in their actual physical qualities. In accord with the Hippocratic Oath to “Do No Harm”, Dr. Kase and Kinesio’s 40 year journey of discovery has led to insights into the body’s powerful natural healing intelligence and the beneficial effect “wise” taping can have to unleash it. The education program created to share those insights informs Kinesio tape, just as fully as the tape informs the education programs.

Kinesio brand tapes are designed and manufactured in the USA by Kinesio to specifications derived and evolved from the clinical application knowledge and insights ("wisdom") of patient assessment and Kinesio Taping®. As noted by Kinesio’s Vice President, Elisa Kase, “We sometimes feel that too few members of the public realize how Kinesio is differentiated from other brands in the market.”

Why should they care? Because the right tape applied with right knowledge means the difference between a patient or user who has a disappointing and ineffectual application of colored tape on the body and one who achieves desired relief, support, and healing.

Dr. Kase invented this modality, but Kinesio is not just the Original, or the Most Authentic. It is a roll of wisdom in your hands.

Make the wise choice, and equip yourself to Tape with Wisdom.

Kinesio® to be Featured on CBS “Innovation Nation”

Kinesio is the inventor and innovator of Kinesio Tape® and its taping method that is frequently used by Physical Therapists, Occupational Therapists, Chiropractors and Massage Therapists to name a few.  The specially designed hypoallergenic tape alleviates discomfort and facilitates lymphatic drainage by microscopically lifting the patient’s skin. This lifting effect forms convolutions in the skin thus increasing interstitial space and allowing for a decrease in inflammation, reducing pressure while enabling a more effective flow of lymphatic fluid in and out of the target area.

For active patients, Kinesio Tape is made of 100 percent lightweight, water-resistant cotton fiber and is easy to use and remove, especially on sensitive skin.  It helps minimize muscular pain and soreness, while reducing swelling and inflammation.  The use of the tape improves the healing process and works to prevent athletic injury.

Complementing the tape, the therapeutic taping technique is designed to facilitate the body’s natural healing process while providing support and stability to muscles and joints without restricting the body’s range of motion.  It also provides extended soft tissue manipulation to prolong the benefits of manual therapy administered within the clinical setting.

“Kinesio is thrilled to be featured on a national television program that highlights the innovation of some of the world’s most important products and inventions,” said Dr. Kenzo Kase, founder and chairman of Kinesio.  “I invented Kinesio Tape and the Kinesio Taping Method in the early 1970s.  The goal of my innovation was to facilitate the body’s natural healing process.  The taping method can be used to treat nearly all physical, psychological, and neurologic conditions.  After that small beginning in my own clinic, we are now worldwide, truly taping the world for

health.  My invention and the healing use of our tape are now considered the standard by which all elastic therapeutic tapes and techniques are compared.”  Each episode of CBS “The Henry Ford’s Innovation Nation with Mo Rocca” tells the stories behind the world’s greatest inventions, along with the perseverance, passion, and price required to bring them to life.

CBS “The Henry Ford’s Innovation Nation with Mo Rocca” is an education program that airs Saturday mornings on the CBS Television Network.

Honolulu, Hawaii will be the host for the 31st International Kinesio Taping Association International Symposium (Oct. 7 & 8, 2017), which provides a great opportunity to learn from a diverse field of experts on how to use Kinesio Taping in your practice and for your patients.  Truly a global educational event as lecturers, presenters and attendees gather in Hawaii from 30 different countries.

PRESENTATION:  The Brain Activities and Changes in the Autonomic Nervous System Functions with Kinesio Taping

Albuquerque, New Mexico, Sep 28, 2017 (GLOBE NEWSWIRE) -- On Tuesday September 26, 2017, the University of New Mexico School of Medicine Department of Neurosurgery and Kinesio began their Educational Collaborative Agreement involving the UNM’s new Center for Kinesio Taping Methods within the UNM Pain Center. For Dr Kase, this is his dream come true…

In 1979, Dr. Kase’s whole purpose of inventing Kinesio Taping Method and his tool, Kinesio Tape, was to extend his chiropractic services to his patients. This would go beyond his practice to do what he has always been passionate about … to help anyone with muscle, ligament, and joint discomfort in a non-pharmaceutical manner, avoiding the use of opioids or other narcotics. It is no wonder that Dr. Kase’s Kinesio Taping Method revolutionized the Elastic Therapeutic Taping global industry. Kinesio Tape was invented out of a deep passion to help and be of service to others.

Since developing the Kinesio Taping Method, thousands of independent case studies have been performed by practitioners all over the world. Since moving to New Mexico in the 1980s, Dr Kase dreamt of a collaboration with hospitals; what better place to build this relationship with than the University of New Mexico. Now, to bear witness to everything coming into fruition it is, according to a much fulfilled Dr Kase, “The perfect timing.” This collaboration will take Kinesio Taping Method and Kinesio Tape to the next level.

Most importantly for Dr. Kase, it will take individual pain management to the next level in helping patients suffering from the discomforts of diabetes, edema, fibrosis, arthritis, among others, as well as ailments associated with sports.

About Kinesio Holding Corporation: For more than 38 years, Kinesio has been breaking ground in the fields of sports performance, pain management and physical therapy. The Kinesio Taping® Method is designed to facilitate the body’s natural healing process while allowing support and stability to muscles and joints without restricting the body’s range of motion. Kinesio is the trusted tape of choice for the world’s elite athletes and the brand is firmly established as the global leader in therapeutic taping